A few months into the COVID work from home era, it was time to upgrade my home network setup. Part of this project would involve running Ethernet to my home office and adding multiple wireless APs throughout the house for improved 5GHz coverage, but I was most attracted to using this as an opportinity to move my various IoT devices to their own subnet.

The process of getting my chromecast devices to work from the IoT network was not difficult, but it did take a good deal of research before I found an appropriate solution. I wrote this post to maybe help a few others who are looking to use chromecast devices when on a different subnet and still have access to speaker groups.

Just to give the walkthrough a bit more context, here is a brief summary of my equipment and network as it was configured from the beginning:

Netgate provides great Pfsense documentation and within a matter of minutes I had created a network for my Trusted devices and a VLAN for my IoT devices.

I then created an IoT and Trusted SSID for the repsective networks and proceeded to connect all IoT devices to the IoT network, and all trusted devices to the Trusted network.

The steps below assume at least a little familiarity with pfsense and Linux systems.

Add firewall rules for the following prootcols/ports for traffic originating from your IoT network destined for the Trusted network:

The next step is to setup a UDP Relay that can repeat mDNS trafic across subnets. The relay is needed in order to allow speaker groups to be seen by iOS and Android devices as they require broadcasts to originate from an address on the same subnet.

If you're not concerned about speaker groups, install and configure the Avahi package and call it a day, otherwise continue on.

pfsense doesn't include make files needed to compile packages from source. If you'd like to build you're own package you'll need to spin up a FreeBSD virtual machine and build it from there.

You now need transfer the udpbroadcastrelay binary file you just built to your pfsense box. This can be accomplished with the following rsync command, replacing kermit with your pfsense username, and 192.168.8.1 with the IP address of your pfsense router.

Assuming there weren't any errors, the udpbroadcastrelay binary should now exist in the home folder of your pfsense user.

Upon reboot you should be able to cast media to video and audio enabled chromecast devices AND see speaker groups! 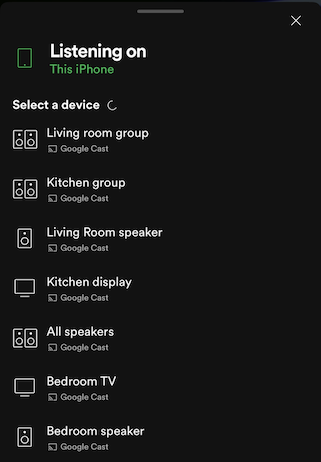